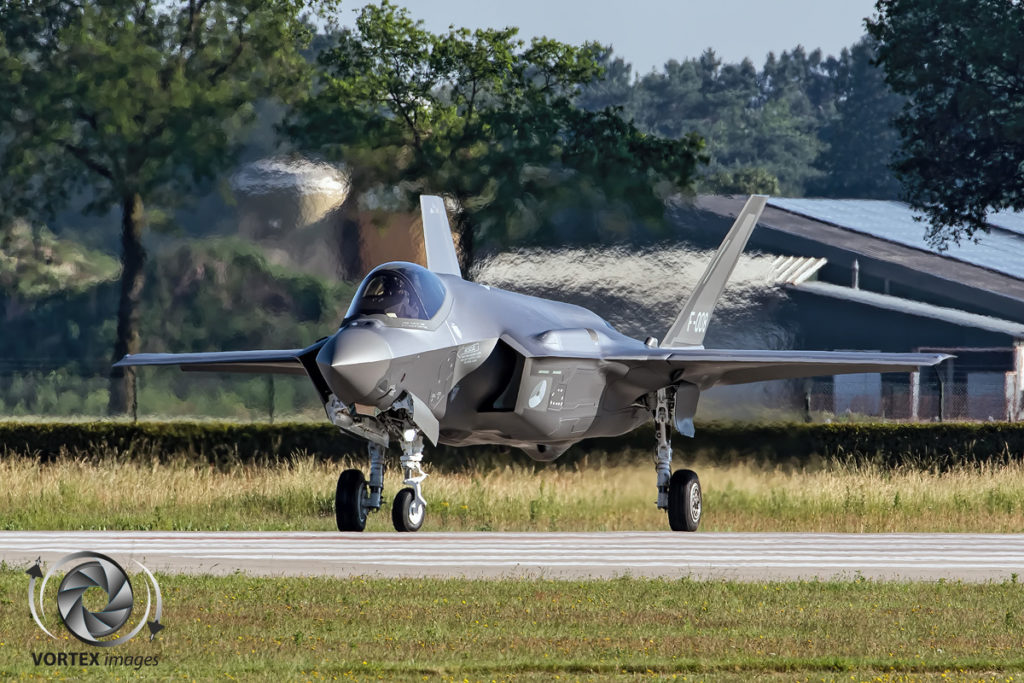 After an absence of three years the Royal Netherlands Air Force once again organised their well known Luchtmachtdagen (Airforce Open Days). This year the event was hosted by Volkel Airbase in the south of the Netherlands.

This years edition will be known for the first participation of the new Airforce Tanker, the Airbus KC-30M. Still in its primer it was displayed in the static display. The airframe shown will be the future M-001 which is scheduled to be delivered to Eindhoven Airbase next year. Also on display was the new fighter in the inventory of the Royal Netherlands Air Force. Like so many nations, the Netherlands has chosen the F-35 to replace its 40 year old F-16 fleet. The Italian Air Force send one of their F-35’s to participate in the static display. While the Netherlands flew two of the US based F-35’s to Volkel to participate in both the static aswell as the flying display. The F-35’s flew a global strike mission in which they flew from their base in the United States to the Vliehors range to drop a pair of inert Laser Guide Bombs. After the mission they recoverd to Volkel Air base where they were re-armed to train the go-around for a second mission. Both of the F-35’s were scheduled to take part in the flying display but unfortunately one of the two Dutch F-35’s had a malfunction which kept it grounded.

The flying display was made up by a variety of aircraft. The Swedish Historical Flight send two of their aircraft to display. Both the SK-35C Draken and the AJS-37 Viggen gave an impressive display and weren’t showing their age at all. A first for the Luchtmachtdagen and a new display item in the Dutch circuit came in the form of a new Supermarine Spitfire. This Spitfire Mk.XVI, owned by Jumbo Supermarket CEO Frits van Eerd, was flown by former RNLAF F-16 Display Pilot Ralph ‘Sheik’ Aarts. This Spitfire has a rich history and was actually operated during WOII by the Royal Air Force 322 (Dutch) Squadron, hence the aircraft is painted in its original wartime paintscheme, 322 Sqn still exits and operates the F-16 out of Leeuwarden Airbase. Another WOII fighter on display was the Vroege Vogels Foundation North American P-51K Mustang “Trusty Rusty”. This aircraft was also shown in its original wartime paintscheme. Besides these fine historic examples also modern aircraft where shown in the air. Both the Belgian and Danish Air Force send their F-16 solo demonstration, while Spain and the Czech Republic showed off their Eurofighter Typhoon and Saab JAS-39 Gripen. Not commonly seen at the Luchtmachtdagen where the two display items of the Italian Air Force. The C-27J Spartan was put through its paced like it was a fighter. Something you don’t see everyday being done by a transport aircraft. The second aircraft displayed by the Italian Air Force was the T-346 Master. This brand new jet trainer really showed why its so popular with many airforces around the world to become their new lead-in fighter trainer. As always the flying display also included the Airpower Demonstration for which the Luchtmachtdagen are famous. Ten F-16’s, One F-35, One C-130 Hercules, Two AS.532 Cougar and CH-47D Chinook helicopters showed off their capabilities. This always remain an impressive side to watch.

With over 240.000 people attending during the two days the Luchtmachtdagen where held it can be said that this event remains hugely popular among the dutch people. They can look forward to the next Luchtmachtdagen in 2020 at Gilze-Rijen Airbase.