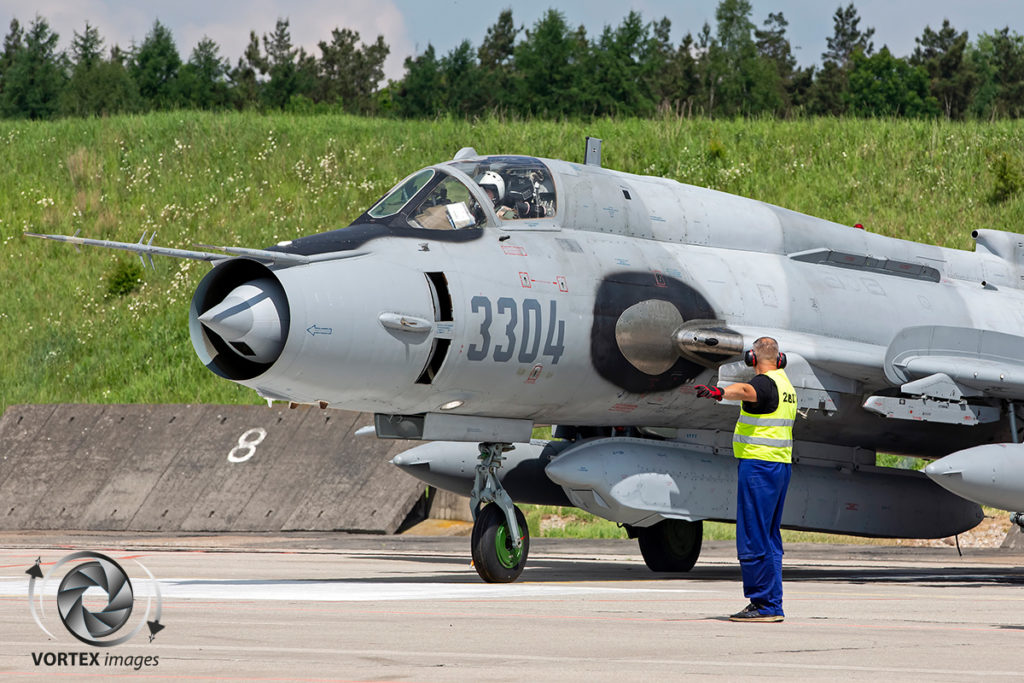 The small Polish town of Swidwin is home to the 21st Tactical Air Base (21st TAB) of the Polish Air Force. After the retirement of the Su-22 by the other european users, as Russia, Hungary, Bulgaria, East-Germany, ex-Czechoslovakia  21st TAB is home to the last operational Sukhoi 22 (Su-22) Fitters in Europe.

The Su-22 Fitter is the export version of the Russian Su-17 which in turn is a development from the Su-7. The Su-22 is a Fighter-Bomber with variable swept wings like the Tornado and the F-111. The big difference in regards to the swept wings compared to the Tornado and F-111 is that the Su-22 can only move the outer part of the wing were the Tornado and the F-111 can move the compleet wing in the different positions. The Sukhoi designers choice to only move the outer part of the wings had to do with the fact that they wanted to avoid the use of complex pivoting hardpoints. In addition the design made sure that the landing gear of the Su-7 could be used instead of having to redesign the landing gear aswell. The wings are operated manually by the pilot and can be moved to the 28, 45 and 62 degrees position.

From the start  Su-22 was designed to be a rugged aircaft that could be easily maintained with minimal ground support. The landing gear is designed so that the Su-22 is able to operate for improvised landing strips. Although it was much more complex than the Mig23/27 it was much easier to maintain because all the systems are grouped close together in modules. These modules can be swapped so that the module do not need maintenance on the flight line but in a separate work shop which means that the aircaft could be back in flying condition much faster.

The Polish Air Force received their  first Su-22’s in 1984. By 1988 the Su-22 fleet was at it’s full strenght with 90 Su-22M4 single seat aircraft and 20 Su-22UM3K trainer aircraft. Which equipped four fighter wings that were stationed at Pila, Powidz, Miroslwiec and Swidwin of which now only Swidwin remains as the sole Su-22 fighter wing base in Poland. When Poland joined NATO the aircraft still on strength were not compatible with the NATO standards. Modifications were needed to integrate the aircraft in to the NATO airfleet. These included an IFF transponder and anti-collision lights. During all the years of service the Polish Air Force tried to keep the aircraft up to date with several modifications. One of these was the addition of a second radio so that the pilots did not have to communicate to each other over the tower frequency. This used to be normal practice during the cold war to prevent pilots from having anti communist conversations. Other upgrades included the installation of TACAN and ILS although some pilots liked the Russian version of the ILS better.

The Su-22 is getting old, its first flight was in 1966, as a result it is getting more challenging to keep the aircraft flying. Therefore the Polish Air Force decided to give the aircraft a final thorough modernization, which was implemented by WZL-2 (Wojskowe Zaklady Lotnicze 2). This includes a avionics upgrade, gun camera and new radio’s. Also all the gauges where still in the metric system, in order to ease the pilots workload these have been changed to the imperial system. On the outside, the modernised aircraft can be recognized by a new two-tone grey paintscheme except two aircraft. Su-22’s with registration 707 and 305 are allowed by the Polish Air Force HQ to remain in their special tiger and black livery . Of the total of 110 airframes delivered only  18 airframes have been modernised, when more funds become available a further six might be modernised as well.

Before being a Polish Air Force Su-22 pilot, new pilots start with basic flying training on the PZL-130 Orlik at Deblin Air Force base. After which the pilots who are selected to fly fast-jets are getting their first taste of flying a jet powered airplane in the TS-11 Iskra.  After completion of the flight training the pilots will get their posting to their asigned Air Base and airplane type. For the Su-22 this means that the pilot will transfer to Swidwin where they will receive their training on the SU-22UM3K. The flight training invloves between 60 and 70 hours on a yearly base until they become combat ready after 200 hours. Training flights include live bombing missions to the Drawsko and Utska ranges which are located close to the Air Base. A typical Su-22 mission will be flown at high speed and low level,  the task for which they were designed.

The main role of the Su-22 is ground attack. In order to accomplish this the aircraft has three hardpoints under each of the inner non-movable wings and up to two hardpoints on each side of the fuselage as well one under the center line of the aircraft. These hardpoints enable the Su-22 to carry a load up to 4000kg. This can be anything from dumb iron bombs, rocket pods, air to surface missiles and anti-radiation missiles. Internally the Su-22 has two 30mm autocanons with 80 rounds each. These can be complimented with the SPPU-22 gunpods, which contain a single GSh-23L twinbarrel auto canon. These pods have the unique capability that the guns can be rotated downward 30 degrees so that the aircraft can remain level during a strafing run. The SPPU-22 gunpods can also be mounted backwards in order to suppress the enemy when the aircraft has flown over the target area. The gunpods can also be used in a mix of forward and backward firing pods on the same aircaft to optimise the gun coverage. Although the Su-22 is a fighter bomber it’s not wel suited for air-to-air combat. It is able to carry R-60 Aphid air-to-air missiles, which have a maximum range of 4 nm, but the Su-22 its main tactic is to avoid an air-to-air engagement. During a typical Su-22 mission it would therefore be escorted by dedicated air defence fighters. According Colonel Roman Stefaniak, who is both instructor and former display pilot of the Su-22 and with almost 1400 flying hours on the Su-22 one of the most experienced Su-22 pilots within the Polish Air Force you can best describe this tactic as come, hit and run and therefore rely on the escorts to take care of the Air-to-Air threat.

Besides ground attack the Su-22 is also used for reconnaissance by the Polish Air Force. The Polish Su-22 can be fitted with the KKR-1 Recce pods which are mounted on the centerline. This pod is devided in two sections. The forward section is the photographic part and is equipped with three different camera’s each with a different task. Forward facing is the A-39 daylight camera which is capable of taking high resolution photo’s of altitudes ranging from 600 – 15000ft. The other camera’s are facing downwards. These are the PA-1 panoramic day camera and the UA-47 night camera that uses flares to illuminate the targeted photo area. Both have a film drum containing film for two hundred photo’s which can be made from an altitude ranging from 900 to 3000ft. Al these cameras still use wet film so the aircaft has to return to its base to let the film be developed an analysed were as modern recce systems have a real time datalink to send the digital pictures. The rear section is for Electronic Reconnaisance or ELINT. For this task it contains a RTR module. This RTR module is capable to define the precise position of any active radar system. This information is also recorder on classic (wet) film that needs to be processed before analyse.

The Su-22 remains to serve for at least another 8 years although the Polish Air Force is already looking at possible successors to replace both the Su-22 and Mig-29 in Polish service with a single multi-role fighter. The Su-22 is a remarkable fighter with great reliability, the final thorough modernization of WZL-2 and Swidwin’s technicians allows further use of the Fitters, but the modernization will not provide the Su-22 with the NATO required combat capabilities.

We would like to thank the Polish Air Force HQ and all the personnel from the 21st TAB involved for their support in creating this article.