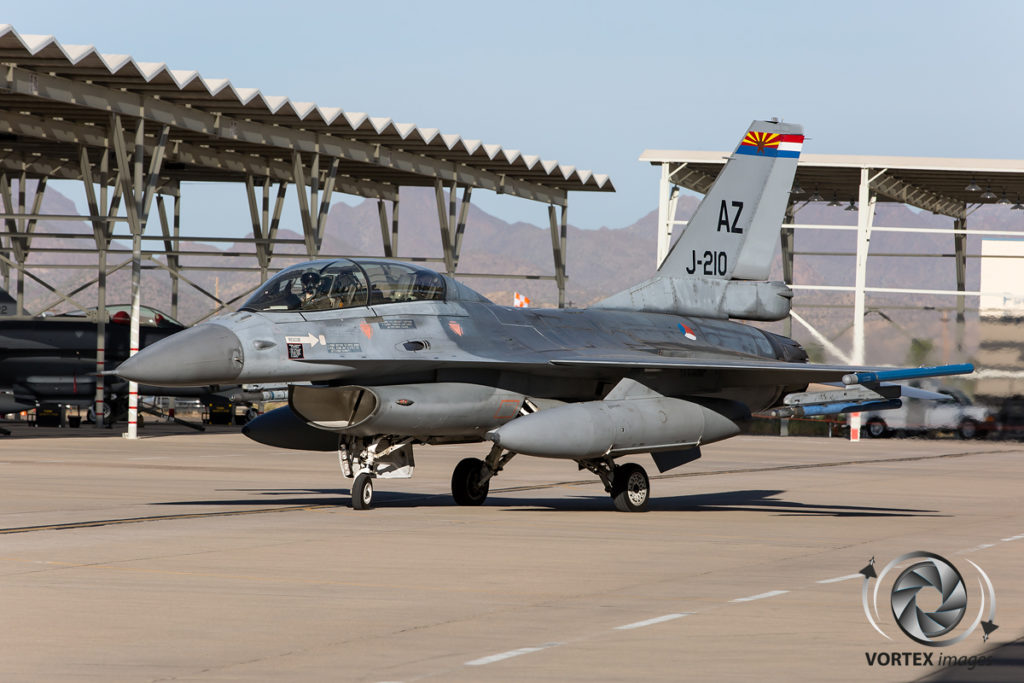 Dutch pilots were the first in a long line of international students to ever train with the 162nd Fighter Wing (FW). Starting in 1989, they were a common sight among the Arizona Air National Guard (AZ ANG) unit for 18 years until the detachment moved to Springfield, Ohio, for a five-year agreement to train with the Ohio Air National Guard’s 178th Fighter Wing (FW). A new contract with the Royal Netherlands Air Force (RNLAF) was signed in 2010 after which the Royal Netherlands Air Force moved their F-16 pilot training from Springfield, Ohio back to the 148th Fighter Squadron (FS) at Tucson.

The 162nd FW is stationed opposite to the commercial terminal at Tucson International Airport. On a daily basis US, Iraqi and Dutch F-16s are being launched into the sunny skies above Arizona. This particular area is great for flying fighter jets. It’s situated in the Sonoran desert, surrounded by five small mountain ranges. Due to the desert climate the weather conditions are extremely good which provides the best possible training opportunities for the pilots compared to the Netherlands which is a country that boasts a typical maritime climate with mild summers and cold winters. Wind and rain are common throughout most of the year.

The 148th FS “Kicking Ass” is equipped with 10 General Dynamics F-16 Fighting Falcons; 5 single-seat versions, the F-16AM and five twin-seat versions, the F-16BM. All these F-16s are owned and operated by the RNLAF. If you compare these jets with the ones from the operational squadrons in Volkel and Leeuwarden you will see no difference. The hardware and software is on the same standard, due to this the aircraft can be swop easily from an operational squadron to the 148th FS. Maintenance on the jets is performed by US personal from the Arizona Air National Guard. They work according to Dutch regulations and requirements and are tested every year by the Militaire Luchtvaart Autoriteit (Dutch Military Aviation Authorities).

Normally each course consists of 4 Dutch students which are based in Tucson for 9 months of training on the F-16. The trainees are transferred from Sheppard where they were flying the T-6 Texan and T-38 Talon with the Euro-NATO Joint Jet Pilot Training Program. The Detachment Commander of the 148th FS, Lieutenant Colonel ‘Niki’ Luijsterburg adds: All the students are qualified to fly jets, but now they will make their first steps on the F-16, which is a weapon platform. In Sheppard they just had to fly the plane, but from now on they have to deal with a lot of complex systems and huge amounts of information as well. The 148th FS makes use of eight Instructor Pilots, five of them are from the Royal Netherlands Air Force and the other three are American instructors. The course syllabus is split up in three phases. Before the students can start their actual training they first spend four to five weeks in classrooms and simulators. It starts with a lot of academics to gain knowledge of the F-16. Most academics are focussed on gaining knowledge of the various aircraft systems, like the hydraulic and electric systems. Next to the academics they also spend time in the simulator to learn the basics on how to fly and operate the F-16. These fundamentals are followed by tactical topics that cover operating the aircraft’s avionics and employing the F-16 as a weapon system. After ground training, students fly the F-16 for the first time in transition training (phase 1). One of the main differences between their basic flying training in Sheppard and the training in Tucson is that during their basic flying training students are able to repeat certain expects which they weren’t able to succeed at first. With the 148th FS the students have to progress every sortie. Every sortie they have to learn and successfully complete something new. This makes the training very demanding. Students fly their first four sorties from the front seat of a two-seat F-16 with an instructor pilot in the back seat after which their first solo is planned for the fifth sortie. From then on a lot of their sorties during the remainder of their training are flown solo. Transition Training covers takeoffs, landings, and instrument flying. Transition Training is followed by phase 2; this is the Air-to-Air (A2A) phase, which involves Basic Fighter Manoeuvres. Students fly against a single aerial adversary from offensive, defensive, and high-aspect, or head-on, positions (dogfighting). Followed by Air Combat Manoeuvring in which students fly as wingmen in a two-ship formation against a single adversary (2V1). Tactical Intercept is the last item on the list before students are ready to start with Air-to-Ground training (phase 3). This last phase of the training involves Air-to-Ground (A2G) missions in which students start with surface attack missions of increasing difficulty. They begin by dropping unguided bombs (like the MK 82/84) and advance to using targeting pods to direct guided munitions. Close Air Support training flights are also in this program. All flights in these series (A2A and A2G) are also conducted at night. Day and night Air to Air refuelling is part of the syllabus and students practice this skill throughout the 9 months. After completing the Air-to-Air and Air-to-Ground phase the students are limited combat ready and are sent back to the Netherlands where they will be assigned to an operational Squadron 312 Squadron or 313 Squadron which are based in Volkel or 322 Squadron which is based in Leeuwarden.

Back in the Netherlands the new pilots will start their Mission Qualification Training (MQT) in which they learn to the F-16 in a different environment. Not only the weather, but also the airspace is different. It’s much smaller and busier than they are used to back in Arizona. The MQT lasts for a few months. In this phase a couple of scenarios from Tucson will be repeated and the pilots will be trained in 4 ship tactics. By completing this training the pilots are ready for their duty and can be send everywhere around the world to fly mission against all enemies.

The 148th FS is a busy squadron. They not only train new students but they also support the Operational Test and Evaluation unit requirements for new ordnance and sensors by providing airframes to complete the test and evaluation. The 148th FS also provides Transition/Requalification Training courses for exchange pilots and pilots who lost their currency (theory and practice). Next to these tasks every two weeks, four operational pilots from the Netherlands are sent to Tucson for training. Lt Col ‘Niki’ Luijsterburg further adds: They get the same training as in the Netherlands, but here they can fly in a different airspace and environment. Also there are more low flying possibilities over here and they can make use of unique ranges that are situated in this area. 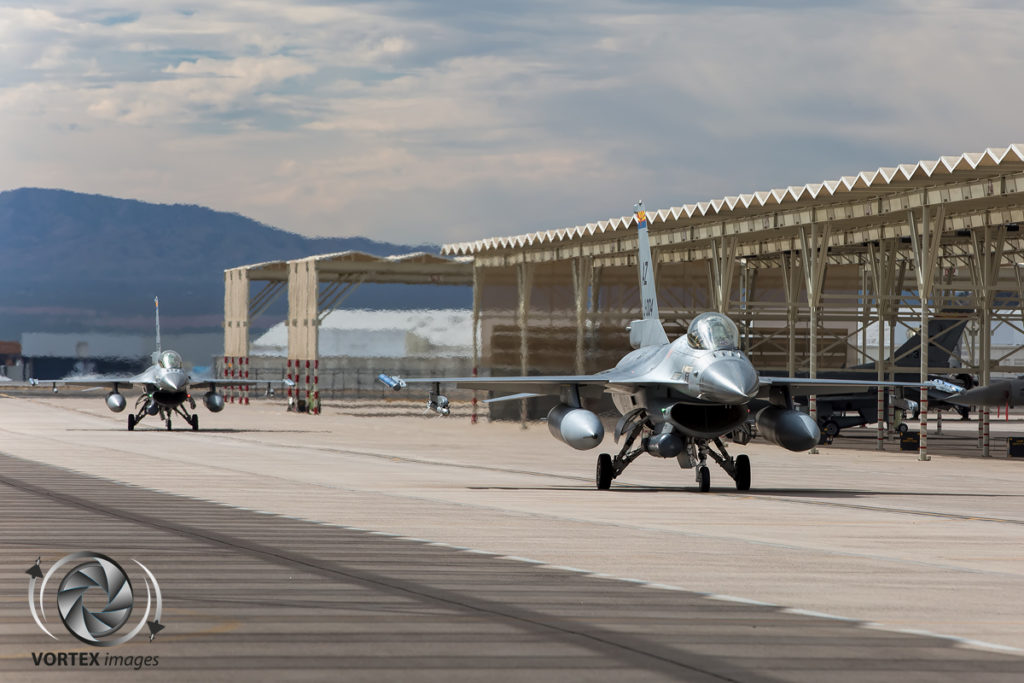 The detachment at Tucson will remain there for at least five more years, as Lt Col ‘Niki’ Luijsterburg explains: Tucson will be operational for the Royal Netherlands Air Force till the summer of 2022, which is three years before the F-16 will be retired (2025). Till this period new and current Dutch F-16 fighter pilots will be trained by us.

We would like to thank ‘Niki’, the students and all the personnel of the 148th FS for their support in creating this article.