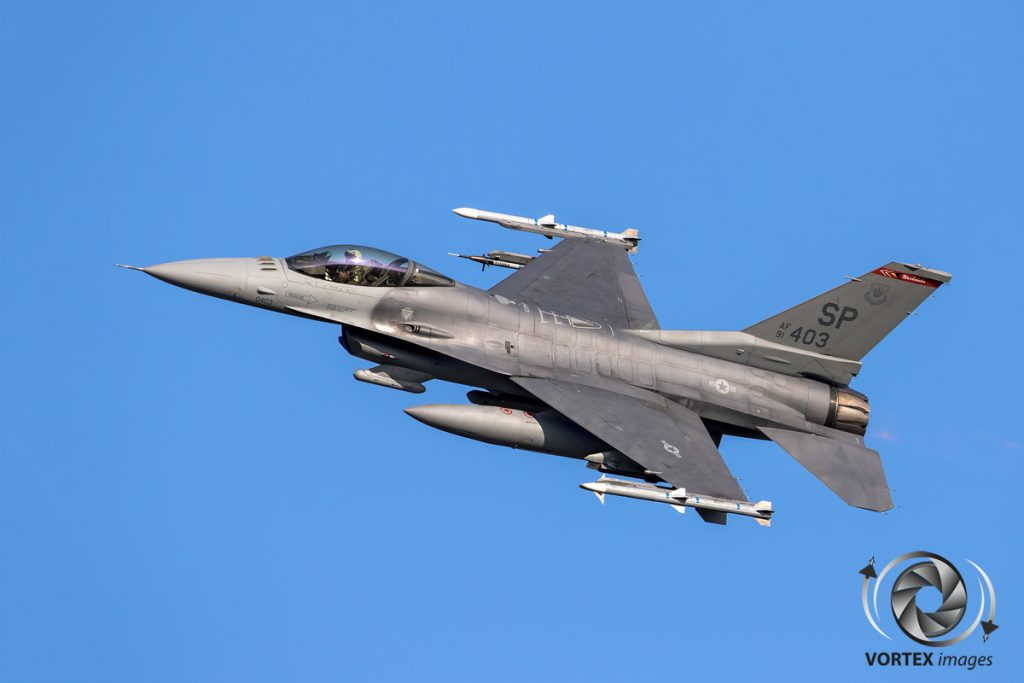 Spangdahlem Air Force Base (AFB) is situated in the green forests of the Eifel and is home to the 52nd Fighter Wing (FW). When the second World War ended the US had a big presence in the western part of Germany. There were many bases close to the border between East and West Germany but to be able to have enough reaction time to airborne threats it was decided to move them more to the West. For this purpose, the construction of Spangdahlem Air Base started in 1951. When the construction was finished in 1953 the first units started to arrive in the form of the 10th Tactical Reconnaissance Wing with their RF-80’s providing the daylight recce and the RB-26’s for the night time recce, providing the USAFE with around the clock reconnaissance.

The F-100 Super Sabres based in France moved to Spangdahlem because the French government at that time did not want any foreign units which were capable of delivering nuclear payload to remain on their soil. This meant that Spangdahlem received their first fighters in the form of the 48th Fighter Wing bringing their F-100 Super Sabres.

Under the Trump administration it was decided that the US Forces in Germany were to be reduced and relocated. The 480 Fighter Squadron was to be relocated to Aviano Air Base in Italy together with parts of the 52nd Tactical Fighter Wing. With the fighters relocated the base would receive units from Mildenhall. But with the Biden administration all these plans have been cancelled and the 480th will remain at Spangdahlem.

That Spangdahlem Air Force Base is capable of more than providing NATO with an Air Wing that is capable of defending the air space, was shown when the Taliban overran Afghanistan. Thousands of people needed to be evacuated from Kabul. Although they were airlifted to Ramstein Air Force Base there was not enough space to park all the transport aircraft. The 726th Air Mobility Squadron stationed at Spangdahlem played a big role in providing these parking spots. They also provided the air crew and maintenance staff with much needed sleeping quarters. But it was not only the military part of Spangdahlem that stepped up. The whole base community was involved in helping out with the more than 35.000 evacuees which were airlifted to Ramstein. Every day busses would leave Spangdahlem for Ramstein with not only service personal but also their family members to help out with registration, providing food and giving medical attention. This showed that Spangdahlem is more than a USAFE airbase, it is a highly involved community that is ready to help when needed, whatever the challenge might be.

The flexibility and resourcefulness of Spangdahlem was challenged again when the call came that that within the next 96 hours three additional units would deploy to the Air Base. These comprised the 388th Fighter Wing from Hill Air Force base which were later followed up by the 134th Fighter Squadron from the Vermont Air National Guard both flying the F-35 Lighting II, VAQ-134 from the US Navy stationed at Naval Air Station Whidbey Island and the 92nd Air Refueling Wing stationed at Fairchild Air Force Base. The 158th Fighter Wing would take over from the 388 Fighter Wing stationed at Hill Air Force Base which was already deployed to Spangdahlem. Some of the buildings used to house all the extra staff were to be overhauled and in the near future but the sudden deployment brought this plan forward. The 52nd Mission Support Group stepped up and was able to provide everything needed to get the buildings ready to for the extra staff arriving.

All these units did not work together until they were deployed together to Spangdahlem. This created a lot of challenges. Although they all belong to the US-military a lot of operation procedures differ between. The 52nd Operational Support Squadron was essential in getting the operations up and running. They provide the office space and secure planning areas that were needed for the operation. As LCDR “Homeskool” of VAQ-134 explained nobody knew each other and how they operated. But during the course of the deployment a lot of lessons were learned which resulted in a 35-page document which can be used by other navy Growler units that might be deployed to Spangdahlem or anywhere else. Because taking your whole unit across the Atlantic Ocean into a new operating area possess a lot of challenges but the 52nd OSS made this a lot easier. And although they only had a 96 hour heads up they got all the basic needs sets up so that the deployed units could start working from the time they touched down at Spangdahlem. Although VAQ-134’s main mission with its EA-18G Growlers is to jam enemy radars and disrupt enemy communication, they are at the moment tasked in the same way as the F-35’s, F-16’s and all the other NATO aircraft involved in showing their presence all along the Ukrainian border. But should the need arise VAQ-134 is ready revert to their original mission.

Although the basic deployment was to provide a presence along the border of the Ukraine all the units also flew a lot of missions with the other NATO partners such as the Netherlands, Belgium, German, Romanian and Polish Air Forces. This provided the deployed units with valuable training opportunities on days that they were not tasked with operational missions. As Captain “Beasty” of the 134th explained to us, the Vermont Air National Guard was the first ANG unit to receive and until now the only active unit that flies the F-35 in the Air National Guard. And that this deployment provides a lot of operational training that cannot be done while the unit is stationed at their home base. Especially the younger pilots that started their career on the F-35 do not have the operational experience that the older pilots have which transitioned from other platforms like the F-15 or the F-16 have. But the possibility to train with the different NATO units and the operational mission provide an impressive learning curve.

As the tasked missions can last for several hours there is a big demand on tanker aircraft. This is where the 92nd Air Refueling Wing comes in. To provide the extra refueling capacity the 92nd deployed 4 KC-135’s to Spangdahlem. As they normally configured to refuel using the flying boom system at the back of the aircraft, this method can only refuel aircraft that use this system. The US Navy and a lot of NATO partners use the hose and drogue system. To make sure that the 92nd could cater to all the refueling needs the three of the deployed aircraft carry the mk32b refueling pods underneath the wing tips. With these pods and an adapter attached to the flying boom the aircraft can refuel 3 aircraft at the same time. As this adapter has to be attached on the ground it can’t be removed in flight which means that the boom is not usable in the traditional way. Most missions were flown with the two wing pods and the boom in the normal configuration. This way there was always fuel available for the NATO aircraft flying the missions.

We would like to thank the 52nd Fighter Wing and their colleagues for their great support and hospitality!