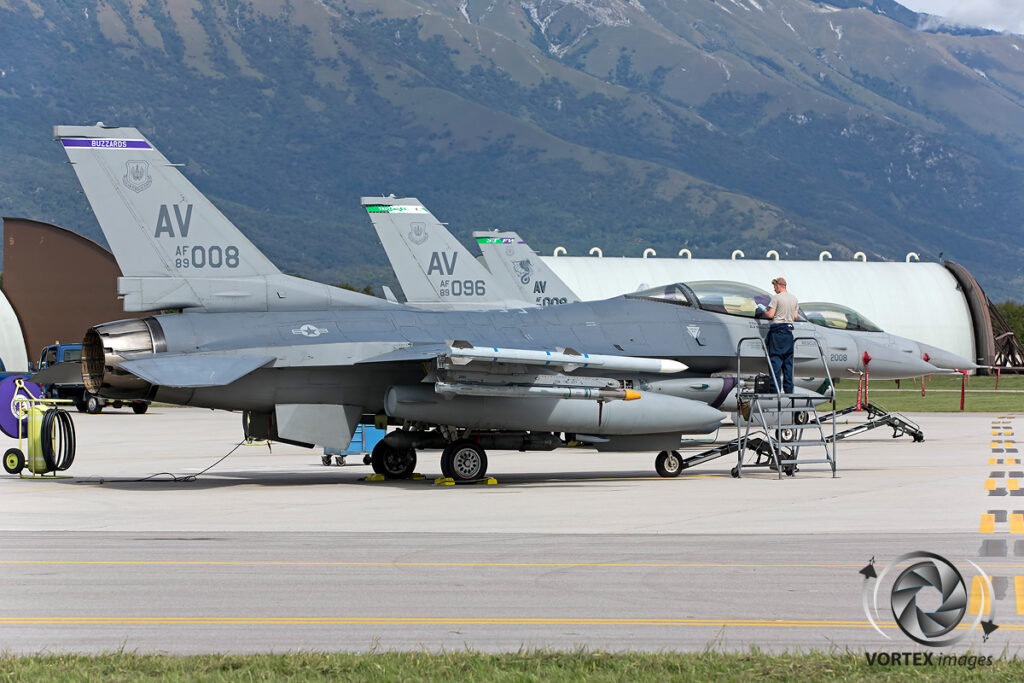 In beautiful Northern Italy against the foothills of the alps lies Aviano Airbase, one of the two bases in Europe which houses the USAFE F-16 fleet. The 31st Fighter Wing calls Aviano their home with the 510 Fighter Squadron and the 555 Fighter Squadron operating under its command.

Aviano airbase is situated in the northern part of Italy in the vicinity of Venice. Aviano airbase has a rich aviation history. The first use as an airbase dates back to 1911 when it was a training base for the Italian Armed forces. During World War 1, Aviano airbase was used to launch missions against Austro-Hungarian and the German Armies. One of these raids was a daring air raid on the Austrian Naval yards at Pula by Maurizo Pagliano and Luigi Gori. Despite that the raid was not approved by High Command they executed their unauthorized but heroic mission with success. This resulted in both men earning the status of national hero. Aviano airbase was named in their honor after the First World War. It became the Aeroporto Pagliano e Gori.

In the Second World War the airbase was used by both the Italian and German forces for air raids against the Allies. In 1945 the Aviano was captured by British Forces that would use the base until they left in 1947. When the British Force left the base it came under Italian command. In 1954 the Italian and American government signed a mutual use agreement in which the US Air Force could use the base but the base would remain under Italian command. This makes Aviano the only US base in mainland Europe that is not owned by the US Government. In 1955 Aviano became the HQ of the United States Air Force when this was moved from Udine to Aviano. Although the Aviano had a constant US presence the base would not host a permanent fighter squadron, instead Aviano was used by different units on a rotational bases because of the close vicinity of the live fire range. When the Italian Air Force closed the range, the different squadrons stopped using Aviano after which it became a storage base for war time reserves. During the Gulf War of 1992 it played a big part as a transit base for a large portion of the men and materials that were needed in this war.

The 31st Fighter Wing has a long and proud heritage. Its history started when the 31st Pursuit Group was activated at Selfridge Field, Michigan on 1 Feb 1940. When the United States got involved in the European part of the Second World War, the 31st Pursuit Group was transferred to the European theatre to become the first operational American group. The 31st was also the first group to see combat over Europe. Because the 31st Pursuit Group was send to the Europe without aircraft of their own they were equipped with the British Supermarine Spitfire MK Vb’s. As the war progressed and moved to the African continent the 31st Pursuit Group was send to Gibraltar from were the first American mission of the African campaign were flown. During the Allied invasion of Africa, Operation Torch, the 31st flew missions to cover and protect the invasion force from air attacks by French forces in Algeria. After the successful invasion their first base of operations on the African continent became Tafaraoui Airfield in Algeria. As the front moved forward the 31st moved from base to base to keep up with the ground forces as the brunt of the missions flown by the 31st were ground attack missions.

After the Germans surrendered in Africa the 31st supported the Allied invasion of Italy. From their Italian bases they flew sweep missions for the ground troops and also escorted the bombers on their way to destroy German positions. Up until March 1944 the Spitfire was used by the 31st after which they were replaced by North American P-51 Mustangs. The use of the Mustang provided the 31st with a much larger range so now they could escort the heavy bombers on long range missions deep inside German occupied territory.

After the Second World War was over the 31st became part of the US occupying forces in Germany where they flew the P-80 Shooting Star, USAF its first fighter jet, between 1946 and 1947. After this short period the 31st was moved back to the United States without any personnel or equipment. In late 1947 the US Air Force reorganized the wing structures and the 31st Fighter Group became the 31st Fighter Wing and received their aircraft. Under this restructure Turner Field, Georgia became the 31st FW new home base. After first operating the piston engine driven F-51 Mustangs the 31st soon transitioned to the F-84G Thunderjets. This upgraded model of the earlier F-84 models gave the 31st Fighter Wing a nuclear capability. Due to their nuclear capability the wing was transferred to the Strategic Air Command and was redesignated as the 31st Strategic Fighter Wing. In the early 1960’s the unit changed its F-84G for the North American F-100 Super Sabre giving the unit its fighter jet that was capable of supersonic flight when flying level.

In 1965 the 31st Tactical Fighter Wing, as it was now known, deployed its squadrons on a rotational bases to Bien Hoa Air Base, Vietnam until the end of 1966 when the complete wing transferred to Tuy Hao Air Base. The main mission of the 31st was air interdiction and close air support in support of troops in the central part of Vietnam. When the fighting in Vietnam escalated further with the start of the TET offensive, the 31st Fighter Wing was heavily involved in giving support to the besieged troops. The 31st also provided support when Khe Sanh was attacked and was almost overrun by North Vietnamese troops. When the US decided to reduce its forces in South Eat Asia the 31st Tactical Fighter Wing was again transferred back to the United States without personnel and equipment.

Back in the US the 31st Tactical Fighter Wing was resurrected and equipped with the more powerful and state of the art McDonnell Douglas F-4E Phantom II. Although the 31st TFW was an Air Defense Unit it also took on a second role as a replacement training unit operating out of Homestead, Florida. This meant that they were training new pilots to be ready for their tour of duty in the skies over South East Asia. At the end of the Vietnam War two of the wings squadrons were stationed at Udorn Air Force Base in Thailand to bolster the units already there. When the Vietnam War ended the 31st Fighter wing absorb those two squadrons again. In 1980 the unit swapped their F-4E’s for the older F-4D model. With this change the role of the wing change more to a fulltime training wing and was redesignated to the 31st Tactical Fighter Training Wing. When the F-4D’s were at the end of their operational life the unit received their first F-16’s. With the transition from the F-4 to the F-16 the wing returned to their original air defence task. When the Tactical Air Command became Air Combat Command the wing got its final redesignation to the 31st Fighter Wing which it remains until today.

The strategic location makes the 31st Fighter Wing very important for operations in NATO’s southern region. The 31st FW is equipped with two F-16 fighter squadrons, the 510th “Buzzards” Fighter Squadron and the 555th “Triple Nickel” Fighter Squadron. Both squadrons operate the Block 40 model and are recognizable by the AV tail code which is short for Aviano. The two fighter squadrons both carry a distinctive coloured band on their tail fin. The 510th squadron carry the purple tailband and the 555th squadron carry the green tail band. Both carry their name inside the tailband. During the Vietnam war the 555th Fighter Squadron was part of the 8th Tactical Fighter Wing which was led by the then Col Robin Olds, famous for its part in Operation Bolo.

In 2018 the Secretary of Defence authorized the relocation of the 56th and 57th Rescue Squadrons from RAF Lakenheath, UK, to Aviano Air Base, Italy. The unit operates five HH-60 Pave Hawk Helicopters and is tasked with Combat Search and Rescue of downed airmen behind enemy lines. When the 56th and 57th Rescue Squadrons were stationed in at RAF Lakenheath during the cold war they were in flying range of the possible battlefield. But as the world changed it became clear that the posting of the Combat Search and Rescue assets in the United Kingdom was to far away from any possible operating area. In an effort to establish an enduring Personnel Recovery location closer to the potential operating areas Aviano was selected as the ideal airbase for the future and the Air Force is better situated to provide rescue capabilities across Africa, Europe, and Southwest Asia.