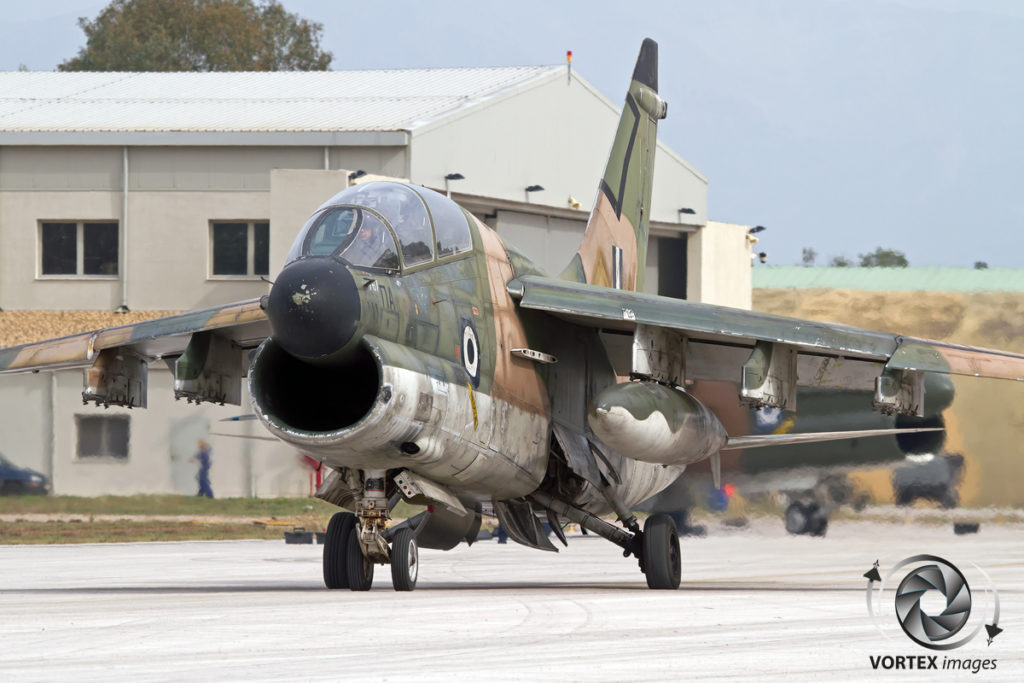 On October 17th 2014 the Hellenic Air Force ended A-7 Corsair II operations with a retirement ceremony. This retirement meant the end of the operational life of the A-7 worldwide. To mark this historical event a spottersday/press day was organized on the October 16th. During these two days journalist and photographers from all over the world witnessed the end of an era.

The A-7 Corsair II was developed by LTV to replace the Douglas A-4 Skyhawk in USN service. The A-7 paved the way to future fighter jets as it was the first to have incorporated a HUD and INS system. Its combat debut came during the Vietnam War were it flew missions for the US Navy. The USAF noticed its performance in Vietnam, and in need for CAS aircraft, the USAF ordered the A-7 as well. The last A-7s were retired from United States service in 1998. The A-7’s were much loved by its crew and were affectionately known as “Short Little Ugly Fellow” although often the word Fellow was replaced by a more inappropriate word starting with the letter F.

The following squadrons within the HAF operated the Corsair II:

Upon the retirement of the Corsair II by the Tigers in 2008, 336 Mira was the sole A-7 squadron left within the HAF and worldwide. The A-7, and its role as a low level attack plane, were so much loved by its crew that they painted their motto “Fly Low, Hit Hard” on one of their A-7E’s. As the A-7 began to show its age the final years of the A-7 were spent as a Lead-in fighter trainer instead of tactical strike aircraft. Upon its retirement in October 2014 about seven airframes were left airworthy.
October 16 was the last operational day for the A-7. During the day, the last remaining Corsair II’s flew several mission with former A-7 pilots. Great opportunities were provided to the attending journalists and photographers to make their last perfect picture of the A-7. There were possibilities to witness the startup, take off and to make perfect taxi shots. For those who didn’t mind seeing aircraft in terrible shape the aircraft boneyard/dump at the airfield was open for public. There you could see several discarded airframes of both the A-7 and the long retired F-104.

The formal end of the Corsair II came on the 17th of October. On this day a specially painted A-7 was unveiled. This aircraft was painted in a grey colour scheme. Included in this paint scheme were all the badges of the squadrons who operated the A-7 within the HAF as well as the serials of all HAF A-7’s. The day concluded with a small airshow from the HAF F-16 Solo Demo Team “Zeus” and the HAF T-6 Solo Demo Team “Daedalus”. The airshow ended with a fitting missing man formation consisting of a A-7, Mirage 2000, F-4E and F-16.

We hope that 336 Mira will be able to continue by their creed Fly Low, Hit Hard!

We would like to thank the Hellenic Air Force for their hospitality shown to us during these two days.