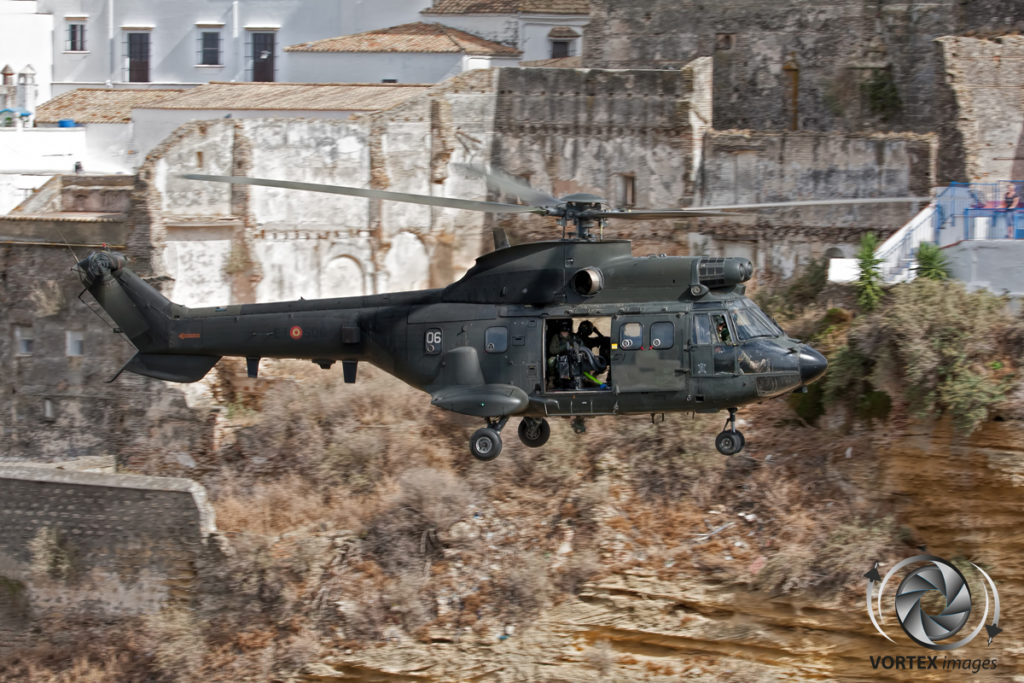 Located on the edge of the city of Sevilla is El Copero airbase, which is the home of BHELMA IV, a  Spanish Army transport unit which operates two types of helicopters, the Super Puma and Cougar.

The origin of BHELMA IV (Batallón de Helicópteros de Maniobra IV) dates back to 30 July 1975 when the army took control of El Copero and created the unit UHEL IV (Unidad de Helicópteros IV) in order to cover the southern military regions and Spain’s sovereign areas in Northern Africa. Before the Army operated from El Copero, the airfield was owned by the Spanish Air Force which flew the Hispano HA.1112 Buchón out of this base. In the beginning UHEL IV operated ten Bell UH-1H Iroquois and three Bell OH-58A Kiowa helicopters. In 1981 these airframes were complimented by four Agusta Bell AB-212 Twin Huey and two additional Bell OH-58A Kiowa’s. The following year the Bell OH-58A Kiowa’s were then replaced by six MBB Bo-105 Bolkow helicopters. The first Aerospatiale AS.332B Super Puma entered service in 1982 which meant the end for the Bell UH-1H Iroquois and Agusta Bell AB-212 Twin Huey, which were transferred to other units within the Spanish Army. After planned reorganizations in 1988, UHEL IV was renamed BHELMA IV and had fifteen AS.332B Super Puma and six MBB Bo-105s in service. In 1998 another chapter was written in the history of BHELMA IV when the first Aerospatiale AS.532 Cougar was delivered to the FAMET (Fuerza Aeromóviles del Ejército de Tierra) and subsequently BHELMA IV. In its 41 years of history BHELMA IV has flown more than 81,000 hours many of which were flown on missions abroad.

In all those years BHELMA IV has been deployed abroad on the following missions:

The mission in Afghanistan was especially a difficult one as BHELMA IV suffered serious losses. On August 16, 2005 the unit lost four squadron members during a helicopter crash involving two Aerospatiale AS.532 Cougar helicopters. Along with these four casualties, twelve men from the Airborne Light Infantry and one civilian were also killed.

Besides being deployed on several missions abroad, since 1981 BHELMA IV also has a permanent detachment in the Spanish autonomous city of Melilla located on the Northern coast of Africa. Melilla shares its border with Morocco and covers an area of 12 square kilometers. The main tasks of the detachment are medical evacuation and providing supplies to the outposts across Northern Africa. Capt. Zaragozano, Commander of the 2nd Section, explains “The mission of the detachment in Melilla consists of controlling and supplying the Spanish areas located in the North of Africa”.
BHELMA IV is currently composed of approximately 250 members and 18 helicopters equally divided between the Super Puma and Cougar.

The pilots of BHELMA IV are dual qualified on both the Super Puma and Cougar. One of the pilots from Bhelma IV, Capt. Ojeda, explains “The only difference in flying these two helicopters is the aircraft its attitude. The Cougar flies nose up and the Super Puma flies nose down”. After initial training with the Air Force (Ala 78 in Granada), the pilots then transfer to their assigned units where they learn how to operate helicopter type in service there. In total it takes 1,5 years to become a Spanish Army helicopter pilot.

As El Copero is located near the Mediterranean Sea, BHELMA IV works closely with the Spanish Navy and US Marines located at nearby Naval Air Base Rota and Móron Air Base. Besides this BHELMA IV also works closely in joint exercises with the French Navy, especially with the Dixmude Amphibious assault ship. Due to this BHELMA IV is very experienced in maritime operations, such as long range overseas flights and ship borne operations such as deck landings. As such BHELMA IV also teaches other Spanish Army units these skills by sharing their experiences. Also BHELMA IV is specially trained to support the Special Operations Forces, and is also part of a Helicopter Task Group which is able to execute special missions, both domestic and abroad, on short notice. During normal missions the crew consists of three: the pilot, the co-pilot and one onboard operator. Capt. Zaragozano explains their roles within the helicopter “The pilot is the mission commander and is also in charge of the navigation, the co-pilot controls the helicopter, and depending on the mission, the onboard operator could be the loadmaster, technician and/or door gunner. In some cases an additional operator is onboard to operate one of the machine guns positioned in the door”. The defensive armament used by the helicopters is the 7.62mm MG42 machine gun, the 7.62mm MAG-58 machine gun, and the 12.70mm M3M machine gun which was added to the inventory after lessons learnt during the mission in Afghanistan.

The future looks bright for BHELMA IV as it will receive all of the BHELMA III AS.532 Cougars when this unit, based in Logrono-Agoncillo in Northern Spain, receives it NH-90s. In return BHELMA IV will transfer its AS.332B Super Pumas to the Tenerife based BHELMA VI which will lose its Agusta Bell AB-212 helicopters.

We would like to thank all the members of BHELMA IV and the Spanish Army Headquarters for their kindness and cooperation.